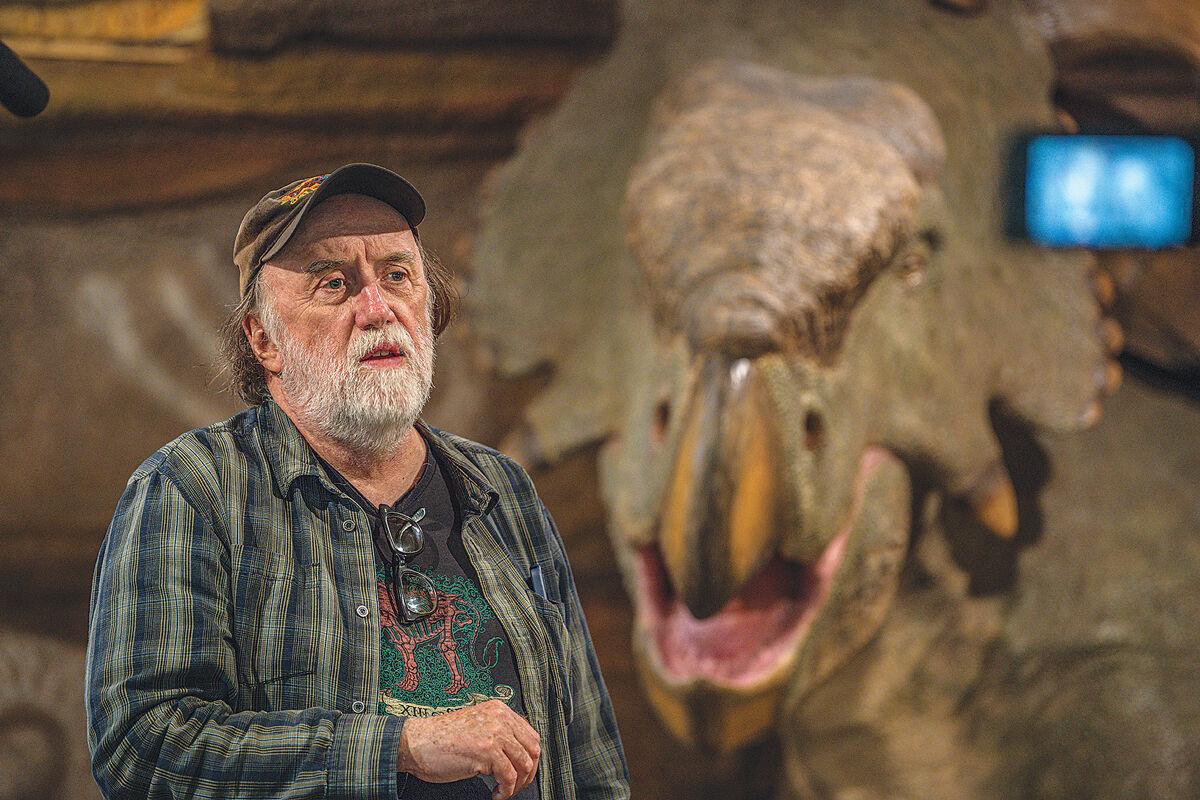 Alaskan artist Ray Troll has some of his work included in a new exhibit called “Cruisin’ the Fossil Coastline,” which opened June 11 at the Oregon Coast Aquarium in Newport. 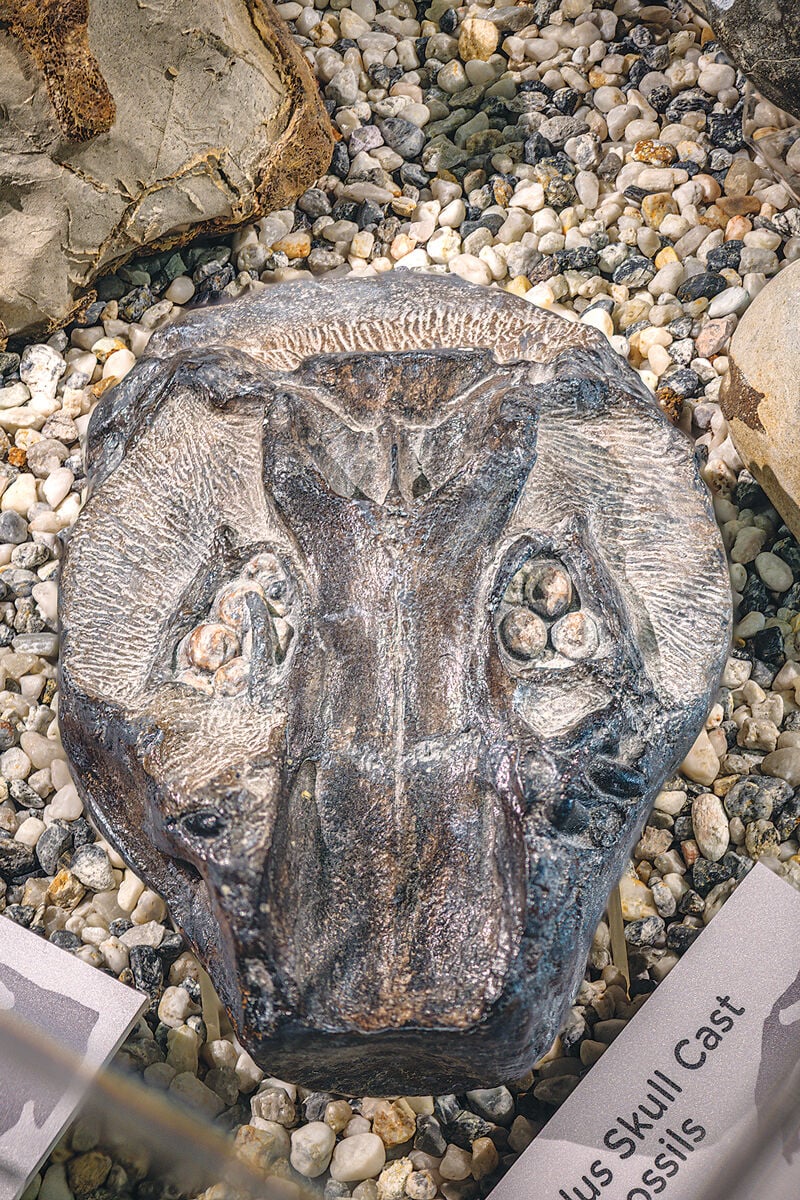 This desmostylus skull, found on the Oregon coast, is included in the aquarium’s new exhibit, “Cruisin’ the Fossil Coastline.”

Ray Troll holds a fossil from an animal called the hell pig, which had razor-sharp teeth and could grow as large as horse. (Photos by Jeremy Burke)

Alaskan artist Ray Troll has some of his work included in a new exhibit called “Cruisin’ the Fossil Coastline,” which opened June 11 at the Oregon Coast Aquarium in Newport.

This desmostylus skull, found on the Oregon coast, is included in the aquarium’s new exhibit, “Cruisin’ the Fossil Coastline.”

A giant spiked-tooth salmon? A pig-like creature with razor-sharp teeth?

The Oregon Coast Aquarium in Newport opened an exhibit June 11 featuring these and other fossils, sure to be a delight for all members of the family. Titled “Cruisin’ the Fossil Coastline,” the exhibit also includes art by Ray Troll of Alaska, whose work is returning for the second time to the aquarium — his first show was titled “Fossils, Fins and Fangs” and was shown in 1997.

This year’s exhibit is based on the book of the same name by paleobotanist Dr. Kirk Johnson, director of the Smithsonian National Museum of Natural History, and Troll. The two men spent much of a year traveling the Pacific coast from California to northern Alaska in search of fossils and their stories.

Troll paid a recent visit to the aquarium to help with the installation of the exhibit and stopped to discuss his work.

Originally from Corning, N.Y., Troll has been an artist in Ketchikan, Alaska for 38 years and describes himself as “a citizen of the coast.” He and his wife, Michelle, run the Soho Coho gallery in Ketchikan.

Of his new exhibit, Troll said it features life-size sculptures as well as “a lot of rocks, fossils, my art and film — really cool stuff. It will be fun for the entire family.”

His artwork is brightly colored and uniquely juxtaposes images of ordinary life with dinosaurs rendered in detailed scientific accuracy — a vehicle cruising down the road with dinosaurs looking over at it, for example. Indeed, his fellow traveler Johnson describes him as a “scientific surrealist.” Troll’s hand-drawn maps and light and audio installations are part of the exhibit as well.

Troll particularly favors the fossils of Desmostylia, an extinct prehistoric mammal that has no living relatives, but whose teeth can be found along the Pacific coastline. The creature had massive tusks and teeth resembling a six-pack of beer.

Another of Troll’s favorites in the exhibit is what he calls the “hell pig,” a relative of the pig that may also have been related to the peccary. “It had massive, razor-sharp teeth and was an omnivore,” he said. “Some got to be the size of horses.”

And one can’t forget the giant spiked-tooth salmon, a prehistoric fish that lived in eastern Oregon near Gateway and was at least 8 feet long and weighed at least 400 pounds.

“The exhibit combines science and art together in a compelling story,” said Ryan Kenny, deputy director of exhibitions and program operations at the Anchorage Museum, where the exhibit opened. “The Oregon Coast Aquarium is the perfect place for it.”

He explained that Troll pitched the idea of the exhibit to the Anchorage Museum, where it was then organized. Kenny helped bring it to reality and aided in the logistics of its tour.

The exhibit toured museums in the area where Troll and Johnson had traveled in search of fossils. After its opening run at the Anchorage Museum, it moved to Oakland, Calif., then on to the Alaska State Museum in Juneau. The exhibit continued at the University of Alaska State Museum of the North in Fairbanks, and the Burke Museum of Natural History and Culture at the University of Washington in Seattle before coming to Newport.

In 2007, Troll was awarded a gold medal for distinction in the natural history arts by the Academy of Natural Sciences in Philadelphia, and in 2006 received the Alaska Governor’s Award for the arts. In 2011, Troll and Johnson were jointly awarded a John Simon Guggenheim Memorial Foundation Fellowship to support their book project, “The Eternal Coastline: the Best of the Fossil West from Baja to Barrow.” A species of ratfish, Hydrolagus trolli, and a genus of extinct herring, Trollichthys, are named after Troll.

In his artist statement on his website, Troll said, “Moving to the state of Alaska in 1983 exposed me to the forces of the natural world like few place on our planet can. It changed my life, and it changed my art. Living on the edge of the Tongass National Forest and being in such close proximity to the wild world, with deep woods on one side of me and the deep ocean on the other, was magical for me and transformative for my art. Fish became my emissary from that untamed world.

“They’ve become vehicles for my moods, my thoughts, and my opinions about the human condition and our own place in the grand biological scheme of things,” he said of fish. “Sometimes whimsical, sometimes menacing and edgy, the fish lead me on, diving deeper into further creative explorations.

“I slowly came to realize that scientific inquiry and artistic inquiry overlap beautifully, as both disciplines seek to ‘know the world’ in overlapping ways … I’ve also found it immensely gratifying to share that sense of artistic adventure with other people through collaborative art projects, exhibits, lectures, performance events, and books,” he added. “And to pass that on to the next generation.”

He said that as he spent time studying fish, his curiosity led him to befriend scientists and writers. “My creative batteries have been endlessly recharged by these associations,” he said. “They led me to believe that the cross currents between art, science, music and literature are the waters I prefer to swim in.” And that cross current between science and art is the base for “Cruisin’ the Fossil Coastline.’

To view a News-Times video featuring Ray Troll and the new aquarium exhibit, go to https://youtu.be/Lo9QyB4SV9Y