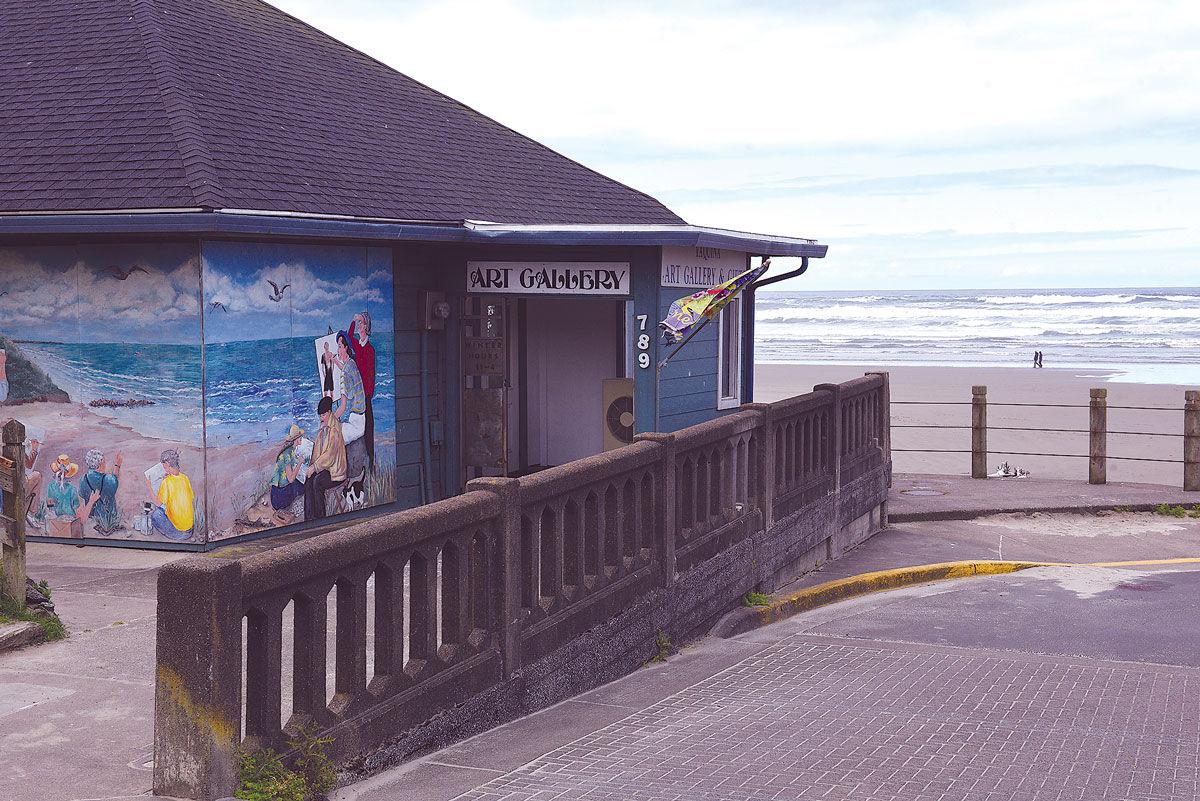 The historic Yaquina Art Association (YAA) gallery sits at the beach at the Nye Beach turnaround in Newport. The gallery and gift shop feature the work of members of the YAA. (Photos by Kenneth Lipp) 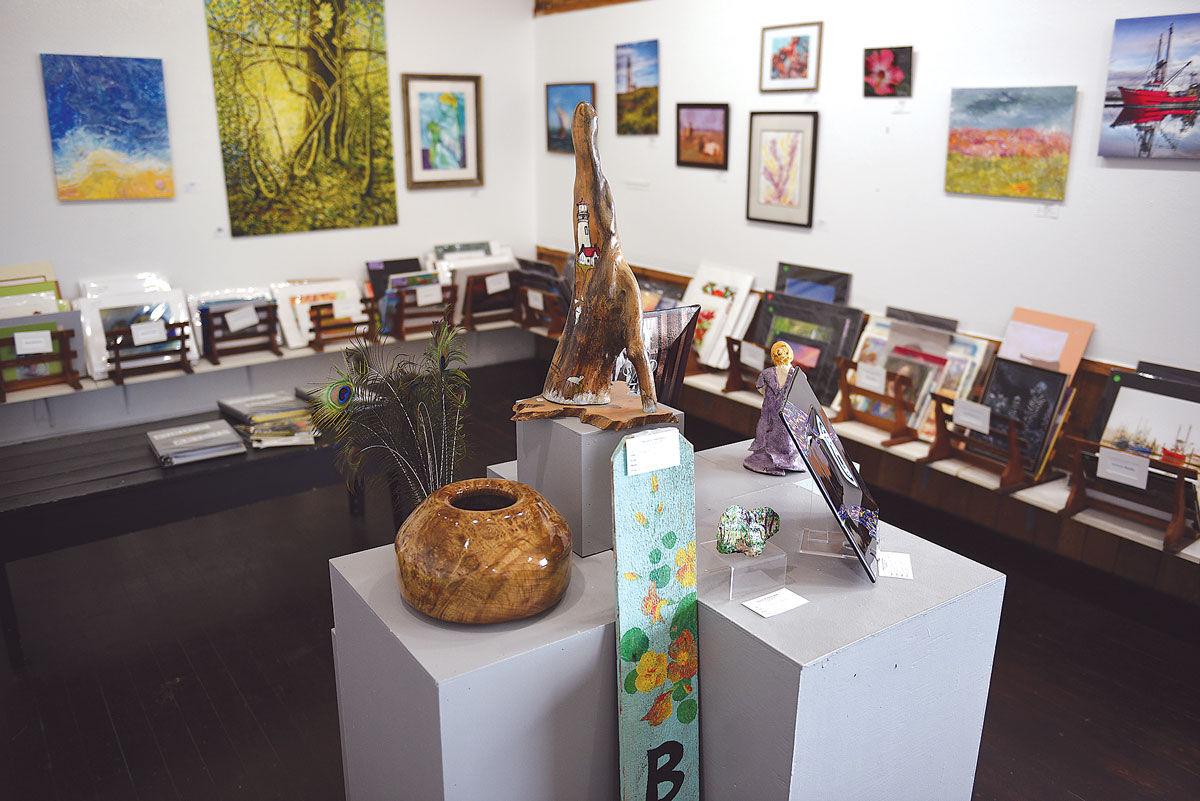 Yaquina Art Association members work in a variety of media, from painting to photography, fiber art to wood, ceramics to jewelry. Their work is displayed at the Yaquina Art Center gallery at the Nye Beach turnaround.

The historic Yaquina Art Association (YAA) gallery sits at the beach at the Nye Beach turnaround in Newport. The gallery and gift shop feature the work of members of the YAA. (Photos by Kenneth Lipp)

Yaquina Art Association members work in a variety of media, from painting to photography, fiber art to wood, ceramics to jewelry. Their work is displayed at the Yaquina Art Center gallery at the Nye Beach turnaround.

Shirley Steinhauer of Newport is a longtime member of the Yaquina Art Association (YAA), a relationship that started when she was a regular vacationer to the coast. She and her husband owned property in Newport and visited frequently, and Shirley began taking lessons from the YAA during those visits.

“I enjoyed the people and enjoyed taking lessons from Harry Niemela every time we would come here,” she recalled. “I joined the (YAA) and signed up to staff the Yaquina Art Center on my vacations — I really enjoyed the members and what was happening in this town.”

She moved to Newport permanently in 1992 and continued her relationship with the art center. “They offered me free art lessons and companionship with other artists, including people like me who were learning. We had camaraderie — it was an all-around good experience.”

Steinhauer served as YAA president off and on for about 10 years, and she continues to take its art classes. A lifetime member, she’s studying watercolor now and plans to enroll in colored pencil and pastel classes.

“And I always enjoyed working in the gallery,” she said. “The people who visit are interested and interesting. The art gallery is wonderful both for visitors and the people of this community. The lessons are always free, regardless of whether you are a member, and our gallery prices are very affordable.

“It’s a wonderful thing for our community,” she added.

Steinhauer’s experience is an example of the range of what YAA offers the community. From a variety of art for sale to a step back into Newport history, the Yaquina Art Association gallery and gift shop is the place to visit. Situated right on Nye Beach, the building houses the work of YAA members. The group’s 102 exhibiting artists, out of 127 members, display their work for sale and volunteer at least 30 hours per year to staff the gallery.

The main section of the gallery is known as the Cloe-Niemela-Clark Gallery in recognition of its teachers and founders — the late Jeanne Cloe, Harry Niemela and Fritzie Clark, whose images can still be seen over the fireplace.

YAA started in 1947, and the group obtained its building from the city of Newport in 1954, when the city was about to burn it down. The building itself dates to 1914 and first served as a bathhouse and later a community center.

Ken Hartwell, current YAA president, said when the art association took ownership of the building, its door was gone and its windows were broken. “We got a loan and did lots of repairs, and at the end of the first year, we had a party to celebrate paying back the $500 loan,” he said. “Now, once a year, we have a Christmas party to commemorate paying off that loan.”

The gallery was closed for several months because of COVID, but it reopened in May. These days YAA members are updating the exterior mural, which was started in 1976-77 and was hung in 1980-81, Hartwell said, noting the artists working on the update are “painting themselves.” Those pictured in the mural were YAA members at the time.

“The colors have faded so it’s being refreshed,” Hartwell said. “This time we’re going to seal it, and it’s being painted directly on the wall.

“We own the building free and clear,” Hartwell said proudly. “It’s had a lot of facelifts outside, and last year we put on a new roof, added insulation and built 3-foot-wide outside stairs to the beach.” He said YAA received a grant in 2019 from the Confederated Tribes of Siletz Indians for building improvements.

“When the building turned 100, we had a birthday party,” Hartwell said. “We had a cake with a Harry Niemela painting printed on it.” The event attracted about 150 celebrants.

YAA membership costs $40 per year, and members must live in Lincoln County at least four months a year. “That way we can tell people our members live, work and play in this community,” Hartwell said.

“We accept what the artist brings in to sell at the gallery,” he added.” We don’t jury — we take the artist at whatever level they are.” YAA artists work in a variety of media, from jewelry to wood turning, fiber to watercolor, pastel, oil, mixed media and acrylic painting.

Hartwell and his fellow YAA members are rightly proud of their organization, particularly its free art classes open to all, regardless of membership. YAA also gives a $1,500 scholarship each year to an Oregon State University junior or senior art student.

YAA art classes formerly were offered at the Newport Visual Arts Center, but rent became too costly; they are now held at Newport’s First Baptist Church on Northwest Sixth Street.

“We don’t want to have paid classes,” Hartwell said, noting the association has offered free classes for more than two decades. “We don’t pay anyone to teach. It’s all done by our members.” The current schedule is watercolor on Mondays, oils and acrylics in the morning and pastels in the afternoon on Tuesdays, and colored pencil on Wednesdays.

When the former Rickert Art Center closed and its shop was dismantled, YAA purchased its electronic mat cutter, and the owner donated his remaining frames and glass to the art association,

“We are very grateful,” Hartwell said. “We received 500 or 600 frames plus two vanloads of mat board, and then he trained us in how to use the mat cutter.”

And while the association is grateful to the church for housing its classes, YAA hopes to purchase a building in Newport for use as an education center of its own.

Hartwell said city parking regulations make that a particularly costly endeavor. “Everything with good parking costs $500,000 or more,” Hartwell said. But donations continue to come in, including one for $1,000 last week.

But more is needed. “We’d like to raise $40,000 or more, but anything would help,” Hartwell said, noting YAA is in its fourth year of seeking a potential site.

Hartwell, who retired and moved to Lincoln County in 1999, said he stopped into the gallery with his wife, Luella, to see what was being offered, signed up for a class and immediately became YAA bookkeeper. “This is good for me to be out doing things,” he said, noting he’s been president six years and often teaches and critiques classes.

In that same tradition, YAA members do most of the interior repairs to the gallery, calling on their experience in the working world. The gallery is a “green” operation, with LED lighting, a low-flush toilet and on-demand hot water, helped along by a $500 donation from Home Depot.

And summarizing the association’s work, Hartwell said, “It’s all about making sure art is available to the public.”

The YAA Photographers operates as a separate group under the auspices of the Yaquina Art Association. Kim Tran, the photo group’s vice president, said the photography club has been meeting for many years. She joined when she moved to Newport in 2009 and said the club has about 30 members.

Prior to the pandemic, the group met in the basement of the Newport Public Library, but since COVID, members have been meeting via Zoom on the first and third Mondays of the month at 7 p.m. The first monthly meeting is usually a program or speaker, while the second meeting is about competition and critiques. The club belongs to the Columbia Council of Camera Clubs (4Cs), which includes clubs in Oregon, Washington, Idaho and northern California. Club members present images for judging to the 4Cs.