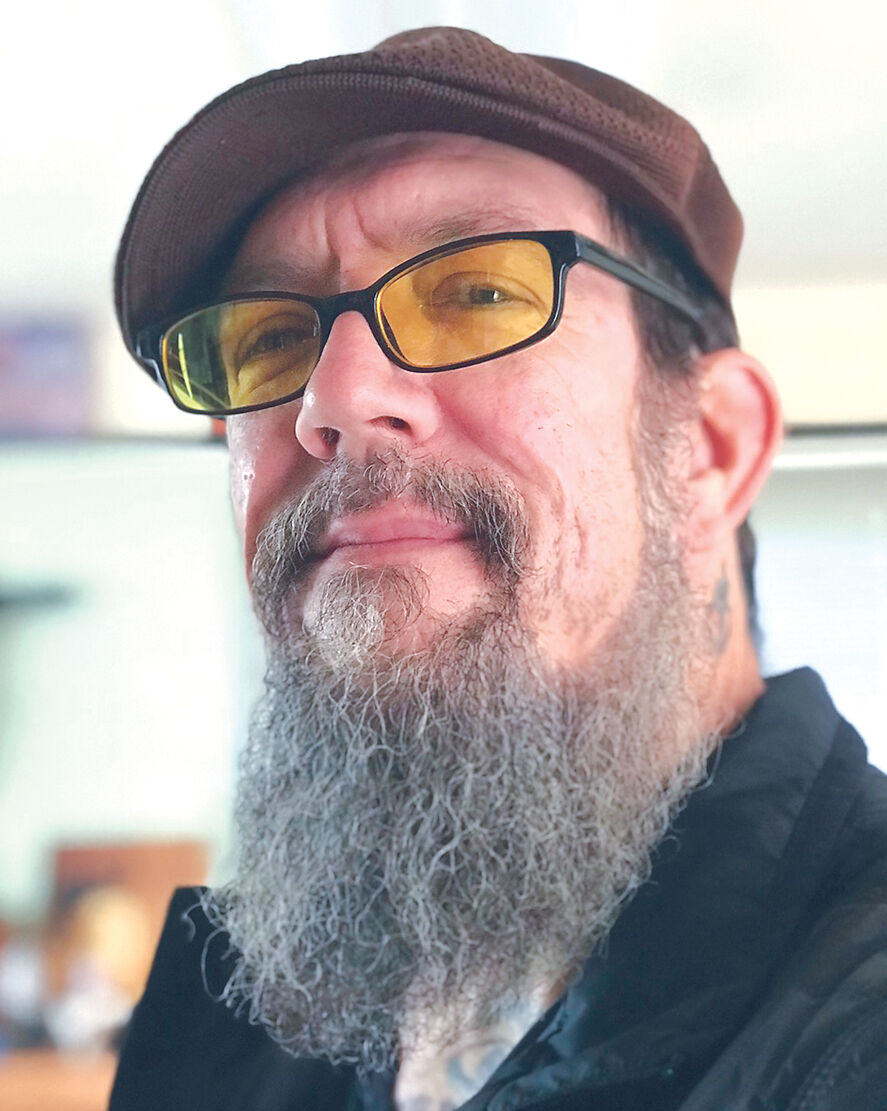 South Beach artist Robert Love will talk about his iconography at 1 p.m. this Sunday, Dec. 5, at the Yaquina River Museum of Art, 151 NE Alder St., Toledo. 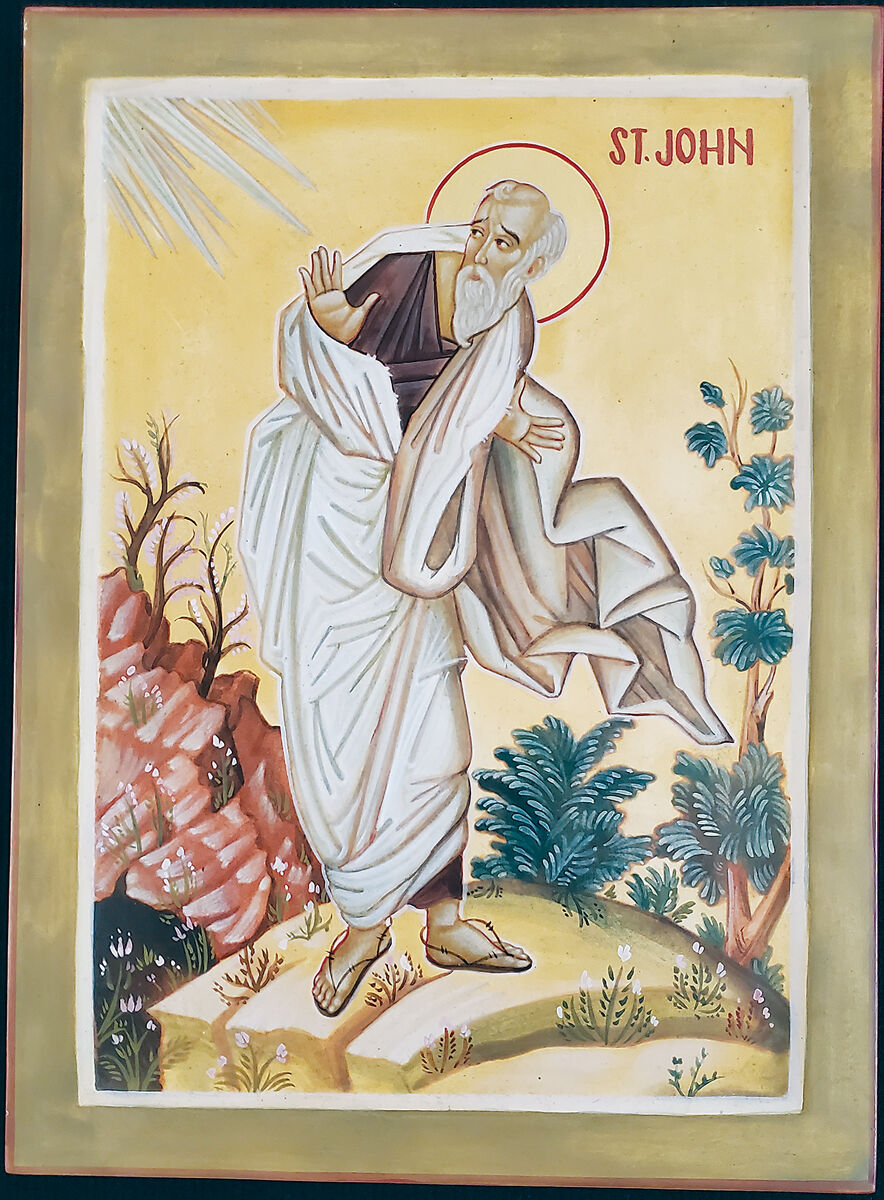 This icon, titled “St John in Exile,” was created by Robert Love. Iconography is an ancient form of art based on models handed down over the centuries, a visual language telling the story of Christ and salvation 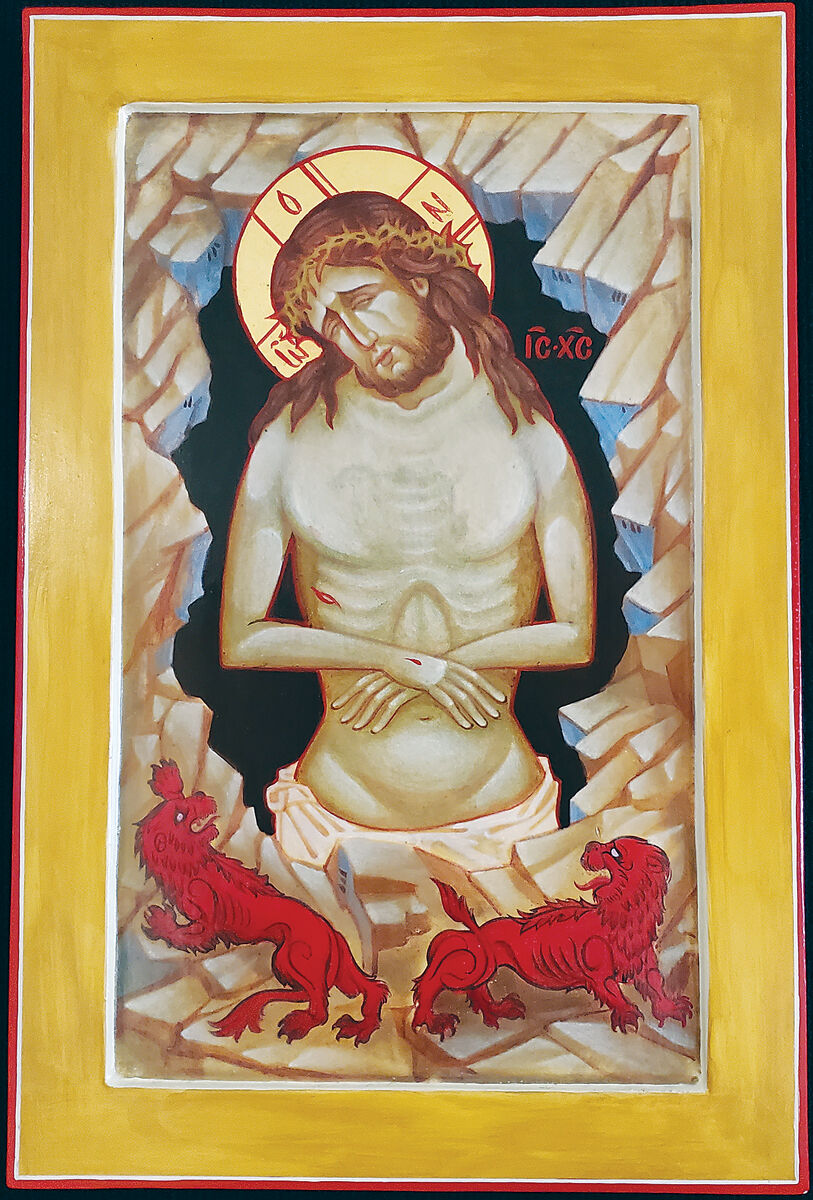 “The Man of Sorrows” is an icon written by Robert Love. Icons are described as being written, rather than painted, because they are a visual language.

South Beach artist Robert Love will talk about his iconography at 1 p.m. this Sunday, Dec. 5, at the Yaquina River Museum of Art, 151 NE Alder St., Toledo.

This icon, titled “St John in Exile,” was created by Robert Love. Iconography is an ancient form of art based on models handed down over the centuries, a visual language telling the story of Christ and salvation

“The Man of Sorrows” is an icon written by Robert Love. Icons are described as being written, rather than painted, because they are a visual language.

Robert Love recalls experiencing a conversion — waking up one day and realizing he had everything he wanted as an artist but was still miserable. Trying to figure out what he needed to do, he was led to the Benedictine monastery at Mount Angel.

And that brought him to iconography.

He entered the Mount Angel Abbey in 2008 and took classes from Kathy Sievers at the Iconographic Arts Institute at Queen of Angels Benedictine Women’s Monastery. The Mount Angel institute teaches the writing of icons, including theology, spirituality and technique.

Iconography is an ancient form of art based on models handed down over the centuries, a visual language telling the story of Christ and salvation. “I write icons to retell that story,” Love said.

“Theology is behind every aspect of an icon,” he explained. “The images are based on geometry, handed down over the centuries — the way the hands and faces are rendered is based on tradition. I do not put anything new in an icon but am basically using a model that has already been written. Everything in the icon is symbolic; even the colors have meaning.”

Icons are described as being written, rather than painted. “It’s a visual language, telling the story of Christ, Mary and all the saints,” Love said, and noted that the iconographer is retelling the story as it was written by doing the icon. “That’s why we say ‘writing an icon,’ because the artist is retelling a story.”

Love, who had been living in Newport before entering the monastery, remained a monk at Mount Angel for 10 years, serving as curator of the abbey’s art collection and natural history museum. He returned to Newport when he left the monastery but was laid off from the sign shop where he was working when COVID struck.

“That gave me time to think about what I wanted to do with my life,” he said. And the answer, he realized, was iconography.

Love said he has been an artist his whole life. Raised in Texas, he served in the U.S. Army for five years, and when he left the military at age 22, began working at Tower Graphics in New York City. “That was a lot of fun,” he said. “But I was also interested in tattooing, and after a couple of years, I did tattooing full time, until 2007, mainly in Texas but also in New Orleans, New York City and Seattle.”

Love describes iconography as a finicky and laborious medium. “Writing an icon is a very slow and deliberate process, with layer and layer of transparent washes,” he said. “It’s the opposite of painting with oil or acrylics, and is more subtle, with layers of color, each affecting the next layer. When you look at the gesso underneath, it appears to have light shining in the shadows.”

Love explained that icons are traditionally written in egg tempera — colored pigments mixed with egg yolk. He makes his own as well as gesso — a base for paint — and the paint itself, as well as the wooden panel on which the icon is written. Sometimes he chooses to paint with acrylics, and notes the process is the same — layers of glazes and washes, but easier to use than egg tempera.

He said there are two schools of thought regarding the use of egg tempera vs. acrylic, but added, “if they had acrylic back then, that’s what they would have used.”

Love is a student of his craft and its history. He explained that Christian art started around the second or third centuries and became codified between the fourth and eighth centuries. In the iconoclasm period, church leaders saw icons as graven images, saying no man-made image should be worshipped and icons needed to be destroyed.

“They were persecuting artists, but finally agreed icons could be objects of devotion, venerating the image of a saint or Christ or Mary,” he said.

Writing an icon is a prayerful process, Love said. “I do a lot of research and study to recreate the geometry,” he explained. “Then I do a sketch and transfer that to the wood panel, and start painting. It takes a couple of weeks, and is a labor of love.”

Love said he takes cues from both the Greek and Russian styles of iconography. “I’m pretty finicky, and the Russian style is very precise,” he said, adding that he is a big fan of contemporary icons from Russia and Ukraine that he describes as almost in the style of modern abstract art.

Love expects to keep writing icons. “It’s the culmination of my whole experience as an artist, from the time I was a child doing drawings to painting airplanes in Houston, to painting signs, and to working as a tattoo artist,” he said. “It all came together in the monastery. I didn’t come to the monastery to be an artist, but I have always identified as one, and everything I do is from that viewpoint.”

And what is significant in being an iconographer, Love said, is the anonymity the medium provides. “Today it’s all about branding and name recognition, as opposed to the integrity of the art,” he said. “For most of my adult life, I was trying to find my voice and identity, and I was led to this style of art. Its tradition is not about the artist, other than that he is a faithful adherent to the models. It takes away the need to recreate the wheel.

“I try to avoid the limelight,” he added. “You know, here’s this heavily tattooed guy who became a Benedictine monk.

“I try to stay true to what I’ve learned and to tell the greatest love story in the world,” he added. “I’m not an evangelist, but through iconography I have been given a voice and language that makes sense to me. But it’s not about me — it’s taking what God has given me and incorporating that in prayer.

“It’s the very best thing I can do, and I am pleased if my work can lead others to prayer,” he said. “I’m sharing the story of love through Christ, his mother and those who followed him and who understand his sacrificial love.”

Love will be at the Yaquina River Museum of Art, 151 NE Alder St., Toledo, at 1 p.m. Sunday, Dec. 5, to discuss his iconography. Several of his icons are on display in the museum’s annual Promise show, which features icons from the 19th century to today.

Due to COVID restrictions, masks are required in the museum, and seating is limited. The exhibit continues to Jan. 23, with a closing reception from noon to 4 p.m. that day. Call 541-336-2797 for more information.